When I was coming to terms with my life after high school, I had a few things in mind. I went in knowing that I would most likely have to pull a few loans. That no matter what school I ended up going to or whatever amount of scholarship I would be able to get through local or merit scholarships, that I would be graduating in 2026 in debt. I wasn’t very fond of this idea. For a few years now I had romanticized the idea of travelling the world once I leave Yellow Springs High School. Once I learned more about higher education, I began to romanticize specifically, the idea of exchange programs, or travel abroad. But over time, my aspirations had been beaten down by those large numbers holding me back. To think, I could buy a house with the money I would be spending for two semesters in a good university. My mother did not have the money to support me for four years of university on her own. My dreams of opportunity after high school were vanishing, slowly. Burning like a final ember to a fire. And so, when I applied to universities across the globe, I realized that perhaps, those dreams still had a chance in coming into fruition. I ended up with some incredibly generous merit scholarships and awards from some of my top schools. College, without an incredibly large amount of debt, was a possibility. And so, with a little bit of hope, I continued to apply myself to my goals for my future. Though, in my application process, my only goal was to fund the minimum for my college expenses. The tuition and the room and board, at the time, was my only goal. During the awards ceremony, I was incredibly grateful to receive the scholarships that I did. I had gotten enough up to that point to cover the little left after my merit scholarships and what my family could provide. And by then I was completely content in my endeavors of going to college. I would be able to attend a good university and be able to afford it all the same. I was able to cover the minimum. Perhaps I wouldn’t be able to take all the courses I wanted to or take part in all the programs I would like to, but I was going to be able to go to college without worrying about a financial demise.

And then Steven (Grinnell, YSHS class of 1969) went up to the podium to talk about the 50th reunion scholarship. Everything he said about it had caught not only my attention, but the attention of the entire conference. Over 170 people contributed to that scholarship. Early into my senior year, I had been a part of the Youth Action Board, in which we raised money for non-profits so that they would be able to get proper funding to continue on with the bettering of Yellow Springs and the support of its people. We raised around $5,000 or so, and even then, I was impressed with the amount of people who contributed to our causes and the amount they all gave to the cause. It was incredible to be a part of that group, and to see the outcomes of our efforts. And to think that over 170 people, locally, could contribute to a single fund; it was quite astonishing to think about. Hearing each year listed for each graduating class that had been a part of the creation of the scholarship was crazy for me to think about. I couldn’t believe that the efforts to get to what they had today went back over 70 years.

At the time, I had been so caught up in how astounding the efforts were to create the scholarship, I didn’t quite realize that the name called for it had even been my own. I was in complete shock- surprised to say the least. I really hadn’t expected to get the scholarship, but my councilor, Mr. Smith, had encouraged me to apply for it anyway, and now, thinking back on it, I’m really, really glad that I did. I’m not sure if I had realized it until more recently, but I no longer look towards the next years of my life with fear or worry. A sort of burden had lifted off of my back as everything that I once had I now have again. I’m incredibly grateful to have been chosen for this opportunity. Having this, I really feel cared for by the community that raised me more than I had been before. It’s quite exciting to think that I am supported by generations of alumni, and supported by such a large community. Having this support as I traverse through my experiences is not something that I will forget easily- or at all- and I will forever be grateful for it.

From the very depths of my heart, thank you so much for supporting my future and my life. 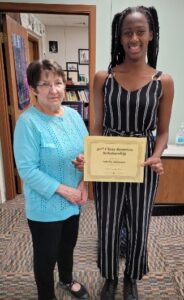 My name is Arielle Johnson. I am a 2021 graduate from Yellow Springs High School. This fall I will be attending Case Western Reserve University studying biochemistry on the pre med track. With the 50th Reunion Scholarship I was able to commit to the college of my choice and find my home for the next four years! 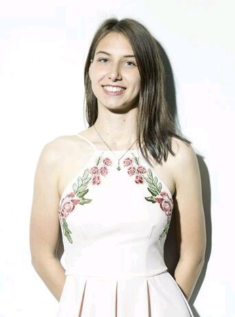 In college I intend to pursue a profession in medicine. I plan to finish a four-year undergraduate degree in pre-med at the University of Dayton. I would like to join an intramural soccer team as well as tennis. Recently I have been considering taking Latin to help me when I learn medical terminology. I am officially undecided on a final career goal at this point in my education. I have researched multiple specializations in medicine. There are many that intrigue me and I am planning on narrowing down my choices once I have attained a more realistic understanding of what the different specialties entail. I realize this process is long and cumbersome but I am committed to applying myself to becoming a physician or nurse practitioner regardless.

Thank you so much for your support.

My transition to Ohio University was made quite easy thanks to the Ohio College Credit Plus program allowing me to take Wright State classes in my senior year of high school. I was already exposed to the standard college workload and class schedule.

As for Athens, the community is great and I have made a few really close friends since I started. I am very grateful for these friends as they make sure I am getting out of my room and enjoying myself outside of class. I also joined the club “Bobcats for Bernie” which is full of amazing people who all share the interest of electing Bernie Sanders as President. I have certainly found my place in the Athens community.

My first semester of classes honestly disappointed me. They were mostly just assigned to me and I found them to be too easy and not important to what I am studying. However, I am more excited with my second semester of classes. I am a political science major and I had been considering adding another economics major. Now, I am taking a microeconomics class that I have enjoyed so much that I will definitely be double majoring in political science and economics.

I plan to transfer to Ohio State my sophomore or junior year and get my degree from there. From there I will either go into law school or pursue a PhD in economics, depending on which major speaks to me more throughout my undergraduate education.

I am very grateful for the Yellow Springs community for giving me the support throughout my childhood and into my early adult life. I will always treasure the town and the community and it will always be what I identify most with. Before all, I am, and always be a Yellow Springer and I cannot wait to give back to the community in a greater capacity than I was able to in high school.